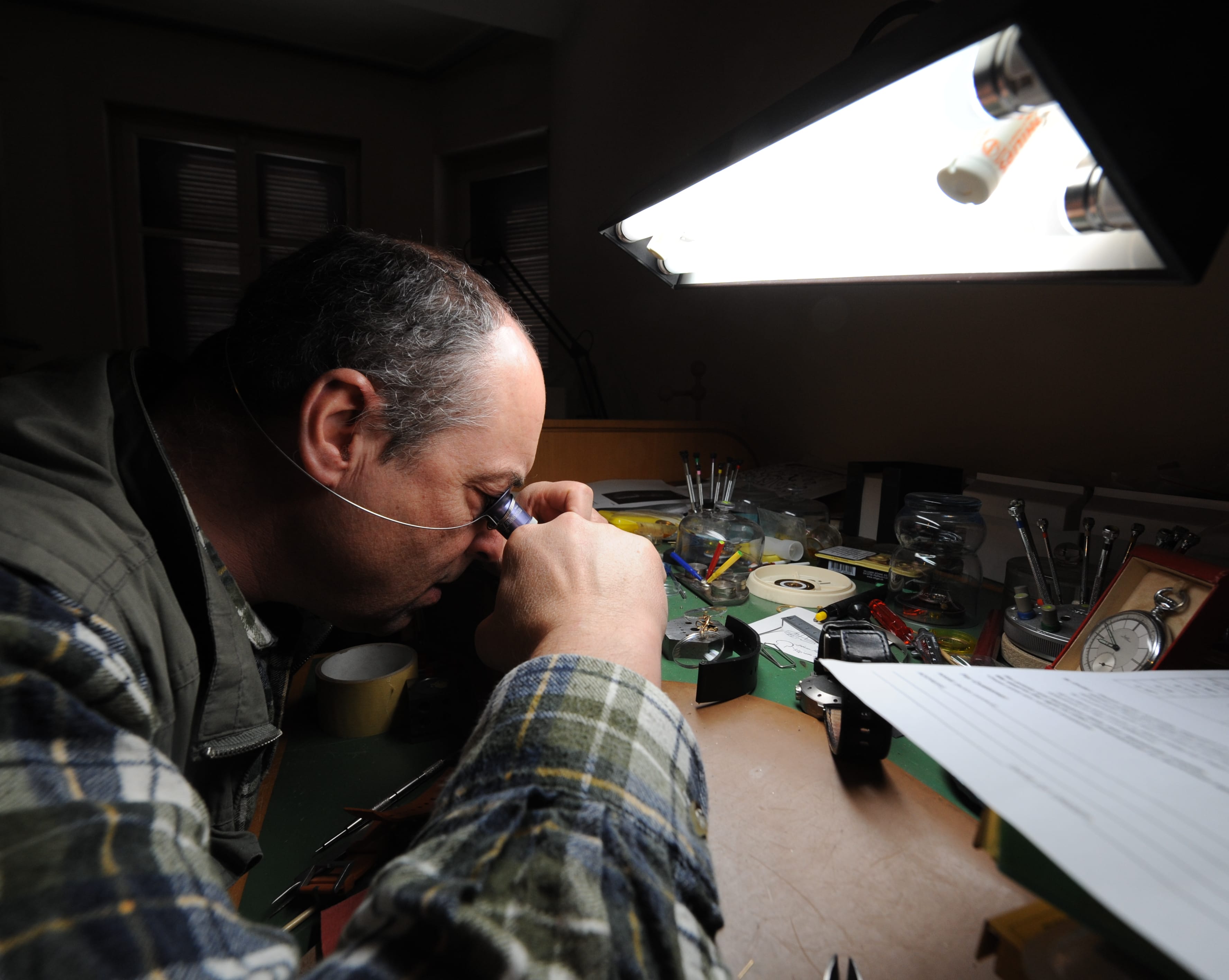 The content below by Ludwig Oechslin was part of our previous website. We are preserving it here. Oechslin describes his moon phase, annual calendar, date and two time zones watches. -CP.

task / idea
a wristwatch incorporating a moon phase indication that reflects the lunar cycle as accurately as possible.

solution / implementation
the sun is represented by a large static dot on the dial at 12 o’clock. the moon appears in a crescent-shaped aperture, which describes an exactly computed arc around the centre of the dial. the widest point of the crescent-shaped aperture is exactly opposite the sun at the 6 o’clock position. rotating beneath the dial is the lunar disc bearing a full moon and, opposite it, a new moon. as the disc rotates counterclockwise, the crescent shape of the aperture in the dial makes the full and new moons appear to wane as they approach the sun and wax as they move away from it; they are at their most visible at the 6 o’clock position. one complete rotation of the lunar disc therefore represents one lunar cycle with all of the moon’s phases. the lunar disc is driven by an epicyclic or planetary gear mechanism. the epicyclic wheels on the underside of the lunar disc are driven from the centre by a finger bonded directly to the hour pipe, their circumferences meshing with a recessed ring gear machined into the underside of the dial. this turns the lunar disk beneath the dial anticlockwise. the central finger engages with a wheel bearing 12 teeth, whose pinion with 14 teeth meshes with a wheel bearing 18 teeth, whose pinion with 14 teeth meshes with the fixed recessed ring gear with its 109 teeth machined into the underside of the dial. this results in a single rotation of the lunar disc in 29.5306122449 days. this is equivalent to a deviation of one day in 3478.27 years.

task / idea
a watch featuring an analogue display and an ultra simple calendar mechanism that needs manual adjustment just once a year.

solution / implementation
the calendar can be displayed using 50 perforations. 31 for the date, 12 for the months and 7 for the weekdays. in my solution, the conventional date disk mechanism provided by the movement drives the disk bearing the date dot, which rotates beneath the dial with its 31 perforations. the colored dot on the date disk moves from day to day. if you supplement the date disk with a set of teeth and a position ring to the inside, these teeth can perform the function of a maltese cross gear, which, as it moves, drives the month indication cog via an intermediate wheel. the month indication cog, in turn, is equipped with long and short teeth, whereby the long ones are arranged in such a way as to engage, on the 31st of the month, with a tooth on the hour wheel and, via this, provide a further impulse of one day at the end of a month with 30 days, in order to provide an impulse to the 1st of the following month immediately after the impulse to the 31st. the impulse passed on to the month wheel is transferred from the latter via its intermediate wheel to the date disk. this arrangement of wheels allows me to transform the movement’s simple date calendar function into a semi-perpetual annual calendar, i.e. one that needs adjusting just once a year at the end of february. the weekday disk also receives an impulse from the finger located in the middle of the hour wheel, such that a maltese cross is formed. the impulse is received twice a day. to compensate for this, the weekday is displayed by means of a broad colored dot visible through the circle of seven perforations. this colored dot is arranged in such a way that it appears in two perforations between 6 o’clock in the evening and 6 o’clock in the morning to indicate the expiry of the current day and the approach of the following one; between 6 o’clock in the morning and 6 o’clock in the evening, the user sees only the dot indicating the current day. this reflects the 24-hour display by indicating midnight when the user is adjusting the calendar date.

task / idea
a date indication integrated within the standard divisions of a 12-hour dial.

solution / implementation
the 12-hour dial is divided into 12 equal sections for the hours and 60 for the minutes per hour or seconds per minute. the date, on the other hand, requires 31 divisions. if, for date purposes, the dial were divided into 30 sections, the 31st of the month would fall on the 1st of the following month. dividing the dial into 30 sections would allow mathematical synergies to be exploited with the 60 minute indices (one day marker every two minutes) and the 10-minute indices (which would act as 5-day markers for the date indication). in the case of months with 31 days, you would need the date indication to remain one extra day on the 31st / 1st – or you would need to get the watch to reverse by one day. to differentiate between the 31st and the 1st, you would need to double the display at the position they share. given that we have a display consisting of a dot travelling under a circle of perforations, there would have to be an additional dot and an additional perforation above or below the 1st of the month to indicate the 31st. if you now incorporate this additional perforation (located above or below the 1st) into the existing circle of perforations, you end up with a spiral moving from the 1st to the 31st of the month. imagine the date dot is in the 31st perforation, and imagine where the date dot would have to be at this moment for the following 1st perforation, you soon see that it would have to be above or below the 30th. if you now join together the date dot for the 1st with the date dot for the 31st, what you end up with under the perforated dial is a curved dash. this curved dash, printed on a disk rotating beneath, and visible through, the date perforations of the dial, replaces the conventional alphanumeric date indication. the date can now, like the time, be told intuitively, and the mechanics driving the function are far simpler than those driving a conventional alphanumeric display. my solution is visually far less intrusive than a conventional alphanumeric display: the date is subordinate to the time, but it remains perfectly readable.

task / idea
a watch with a 12-hour dial capable of indicating the time in a second time zone at the same time.

solution / implementation
the solution would have to be based on a movement providing a standard date function, such as the eta 2892 or eta 2824-2. the date disk would be replaced by an hour disk bearing 48 instead of the 31 teeth on the inside. the disk would be printed with the hours 1 to 12 arranged equally around it instead of the dates 1 to 31. in place of a date window, the dial would feature 12 hour-windows through which the digits of the hour disk can be seen. with the crown in the first position, the second zone’s hour disk can be moved in quarter-hour steps using the movement’s existing date adjustment mechanism.