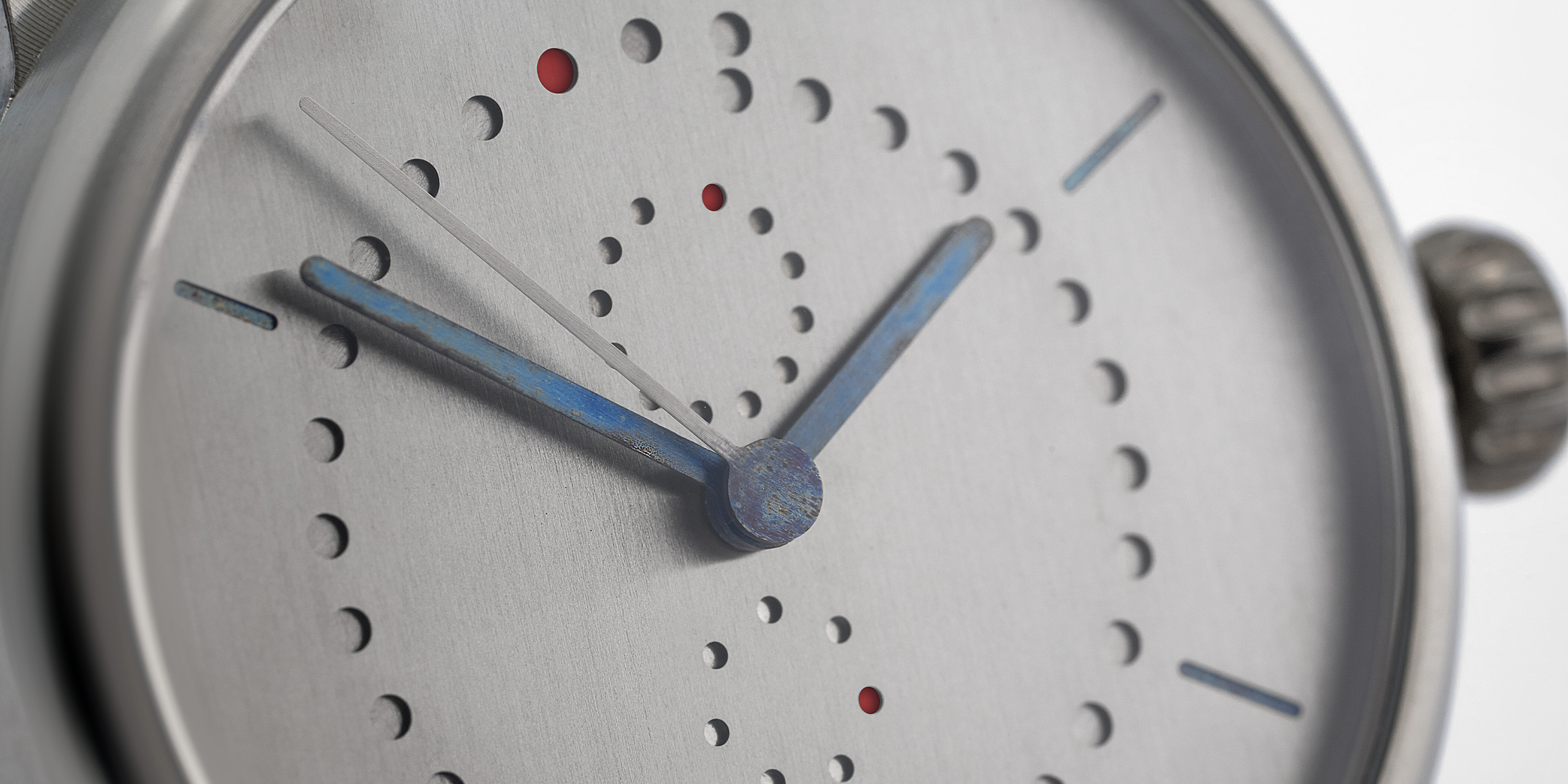 ochs und junior was founded in 2006 in Lucerne and is now located at Rue Numa-Droz 143 in La Chaux-de-Fonds, Switzerland. It manufactures watches developed by Dr. Ludwig Oechslin, the thinker behind some of the most awarded watches of the past 30 years. In sharp contrast to the watch industry in general, which is primarily focused on complications, Oechslin’s interest lies in radical simplification. ochs und junior watches are exclusively sold directly.

Oechslin’s goal with ochs und junior watches is to execute the most functional representation of time horizons in the most technically elegant manner possible. He undertakes an intense design process to create simpler solutions than have been achieved before in wristwatches. Oechslin strives for simple solutions because experience has shown that simpler mechanics are more reliable, more straightforward to manufacture, and easier to service.

In a world geared towards quantitative growth, we have opted for an alternative path  –  one that we are confident is right for ochs und junior. We ensure that we can offer development, production, communication, distribution and  –  very important  –  service from a single source. Either big enough or small enough! Convinced that this principle also applies to the watch industry, we have opted for ‘small enough’.

ochs und junior manufactures about 130 watches per year, which enables it to offer uncompromising timepieces that do not cater to mass taste  –  simplicity instead of complication, visible machining marks instead of polishing, no logo on the dial or the case  –  and to give every customer personal sales and after-sales service directly from the CEO. We aim to grow in terms of quality, not in terms of quantity.

As we manufacture our components and functions in ultra-small batches, for the most part away from mainstream suppliers in the watch industry, we are able to respond quickly to the need for changes and improvements. It also means that we are not held back by the industry’s generally long lead times, and that we have less capital tied up. We finance our innovations through the sale of our watches.

ochs und junior has chosen a personal sales model rather than a conventional (and expensive) distribution network. ochs und junior watches are available exclusively from La Chaux-de-Fonds. To purchase your ochs und junior, you can visit us at our atelier located at Rue Numa-Droz 143 in La Chaux-de-Fonds, or using the ochs und junior website. In either case, we are your personal contact for all questions, sales and after-sales service. There are no middle-man margins or advertising budget, and we work on smaller margins than normal in the watch industry. We are only satisfied when you are.

Ulysse Nardin’s Rolf Schnyder contacted the Lucerne atelier of Jörg Spöring to ask who restored the Farnesian clock in the library of the Vatican, more than 30 years ago. Who could have guessed that this would lead to a lasting and fruitful friendship? Rolf Schnyder and Ludwig Oechslin became soul mates – and remained so until Rolf’s death.

Ludwig Oechslin and his mentor, Rolf Schnyder, were responsible for pioneering developments such as the Ulysse Nardin ‘Trilogy of Time’ series of astronomical watches, as well as the Perpetual Calendar, Freak, Sonata and Moonstruck.

Ulysse Nardin became a partner in ochs und junior in spring 2012, and has the exclusive right to patent and use wristwatch concepts created by ochs und junior.

ochs und junior watches are free of any designation of origin. The phrase ‘Made in Switzerland’ is intended to inspire confidence, but in practice it tends to raise more questions than it answers. Of far greater importance to us are the people we work with. We insist on absolute transparency. As most of our partners are based not far from Lucerne, the ‘Swiss Made’ aspect is a given. Some of our components come from further afield: the leather, for instance, is from southern Germany, and the dials made by Peter Cantieni here in Switzerland are printed just north of the Swiss border, too.

The reason for that is that we really like those particular suppliers, their ideas and their commitment. The advantage of keeping things as local and/or as personal as possible is that we know the people and we’re assured of the right quality – which in turn gives us the greatest sense of satisfaction. And that’s what it’s all about!

Ludwig Oechslin’s son Giorgio was having a laugh when, at lunch one day, he suggested a reinterpretation of the family name (a word of explanation for non-German speakers: Ochs means ox, and Oechslin is a diminutive form of Ochs, i.e. little ox): playing on the image of the old “Ochs” and his cool junior, Giorgio turned it into ochs und junior (or ox and junior). And since his father is known for his unconventionality, he didn’t take much persuading to run with that name.

ochs und junior: intelligent watches for people who don’t always take life too seriously. And rather than place the brand name on the dial like everyone else, we brand the logo (literally!) on the back of the leather strap. Legitimately so, in our case. The ox – that wagon-pulling, abstinent farmyard animal that often ends up as ox tail soup – is a tongue-in-cheek way of indicating that this watchmaking venture of ours, though dear to our heart, should still be seen with a dash of humor.