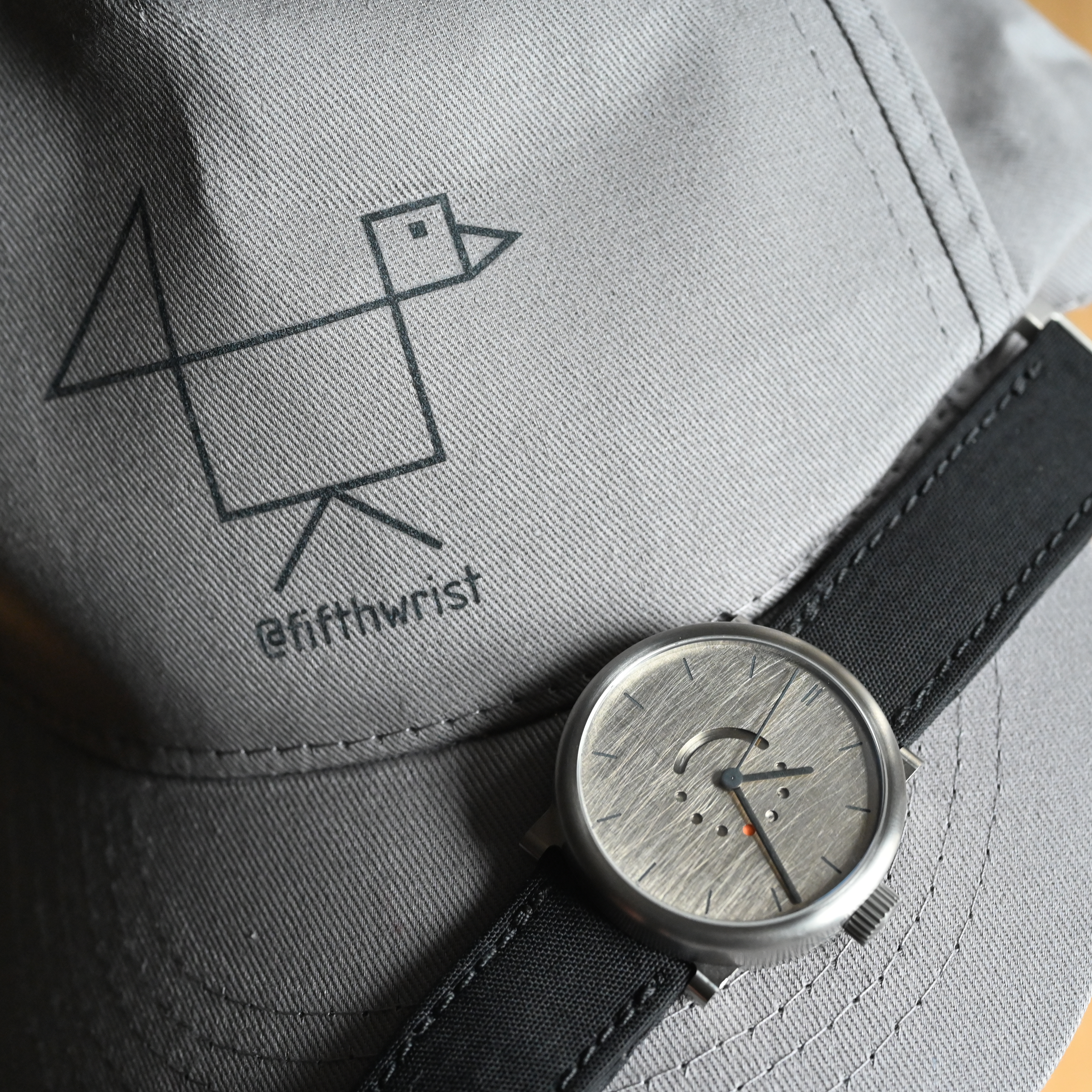 Fifth Wrist is a global community of watch enthusiasts that was founded in Australia in 2020. The goal of Fifth Wrist is to produce watch media – including reviews and podcasts – that are unbiased and free from commercial sponsorship. In August 2022, Claus (@tapir_ffm) and Roman (@timesromanau) from Fifth Wrist recorded a podcast with Prof. Dr. Kornelia Imesch (head and co-owner of ochs und junior) and James Henderson, who works as a Special Advisor to the ochs und junior Board of Directors.

During the de-briefing after the recording, Fifth Wrist was invited to create a special edition ochs und junior watch. The decision to accept the invitation, and to base the watch on the most accessible watch in the portfolio – the settimana raw – was rapidly made.
We were given the artistic freedom to go beyond merely engraving our logo on the caseback, and to consider all the major external elements of the watch – the dial, the hands, and the strap.

So, what should it look like? After much debate, we decided to add indices to Ludwig Oechslin‘s settimana raw design.
While prior settimanas had a single index at 12,
we opted for a double index to bring the design in line with other ochs und junior watches. We likewise swapped the black day of the week indicator for an orange one, as those were traditionally seen on the brand’s watches. The black second hand was swapped for a navy one to contrast with the orange, and the indices were painted navy to match.
We lengthened the minute and seconds hand for added legibility. Jérémy Freléchox presented us with three options to consider when determining the relative lengths of the indices, minute hand, and second hand, and we ultimately decided to have them all match in length. STS were responsible for the galvanization of the dial, which like the special hands were made by Easytool, Carlo Belisario, and Monyco applied Superluminova to the hands. Finally, each owner selected a strap of their own choosing, with some watches delivered on sturgeon straps and others on textile straps –
all created by Sabina Brägger and accompanied by buckles made by Carlo Belisario. The process involved many people, and over a dozen different mock-ups were created by Adam (@mediumwatch) in response to feedback from the Fifth Wrist crew and
ochs und junior. 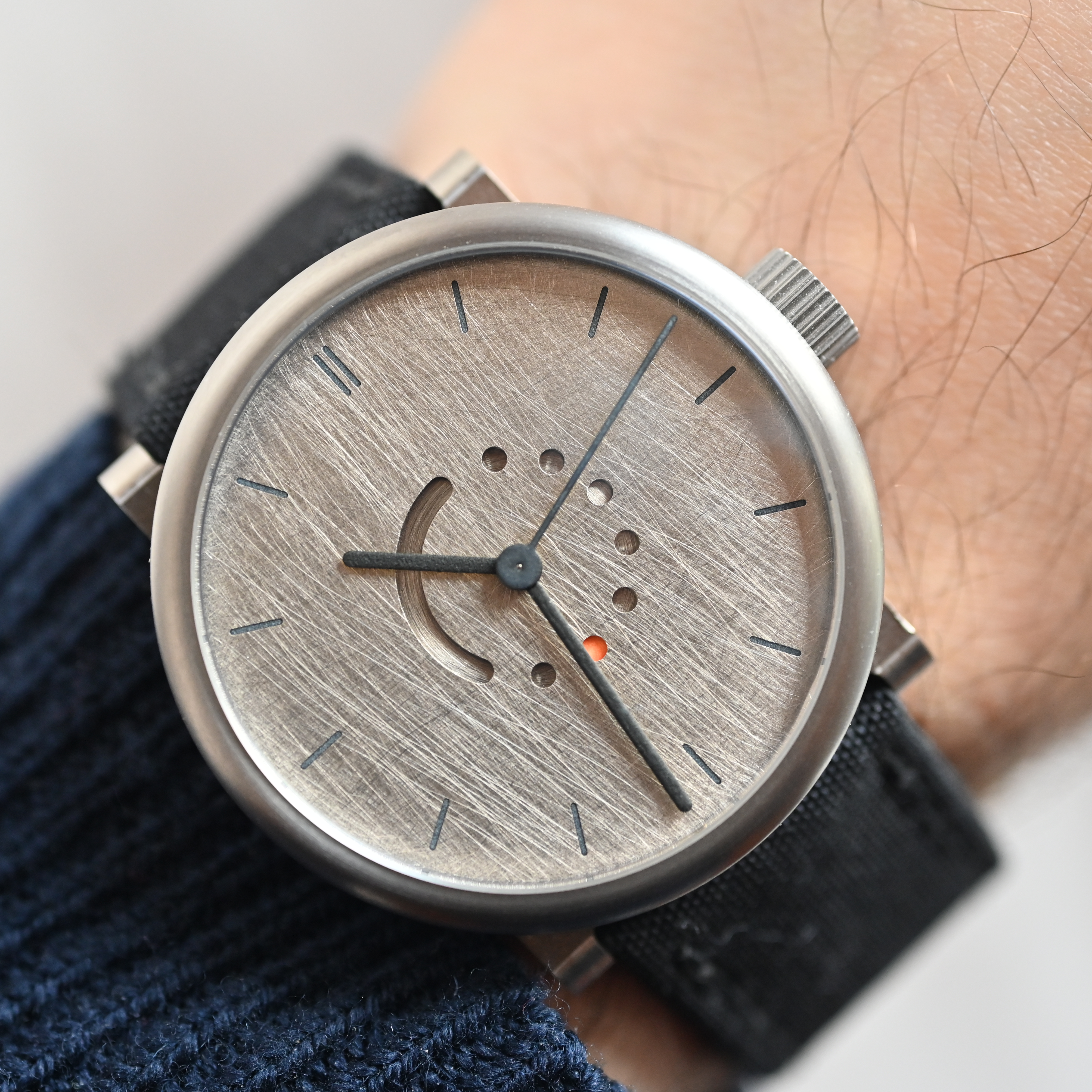 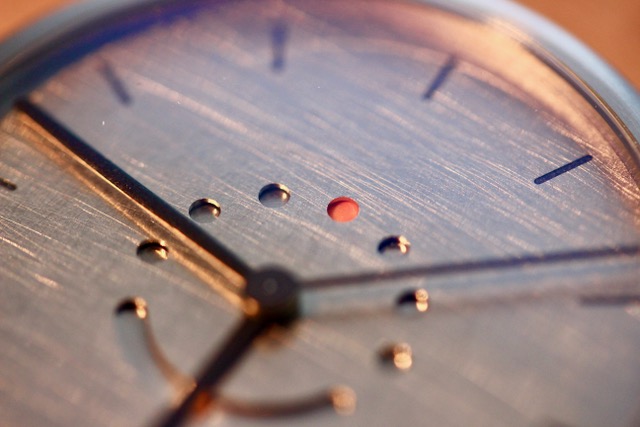 To make the watch reflect its connection to Fifth Wrist, we engraved our logo, Snow the Hen, on the caseback of the case, which Forgemont machined out of titanium. Benoit (@petitesecondes) redesigned our logo to match the brutalist nature of the watch.
Each owner’s handle is engraved as well, as this watch is meant to be a keepsake. Isonorm was selected as the font for the inscription, and the engraving was designed by Andy Jossi, KRT, and then executed by Birchler Gravuren. 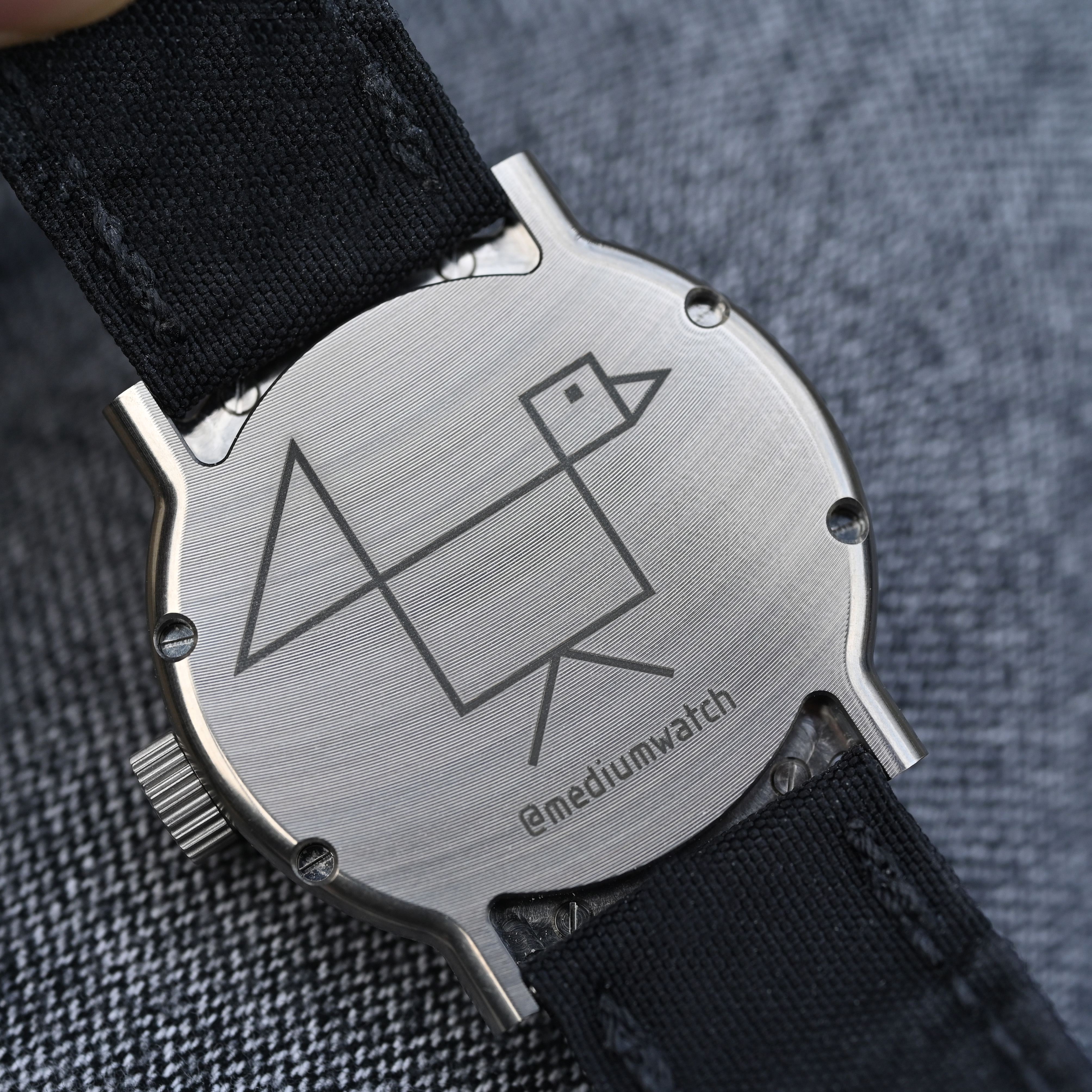 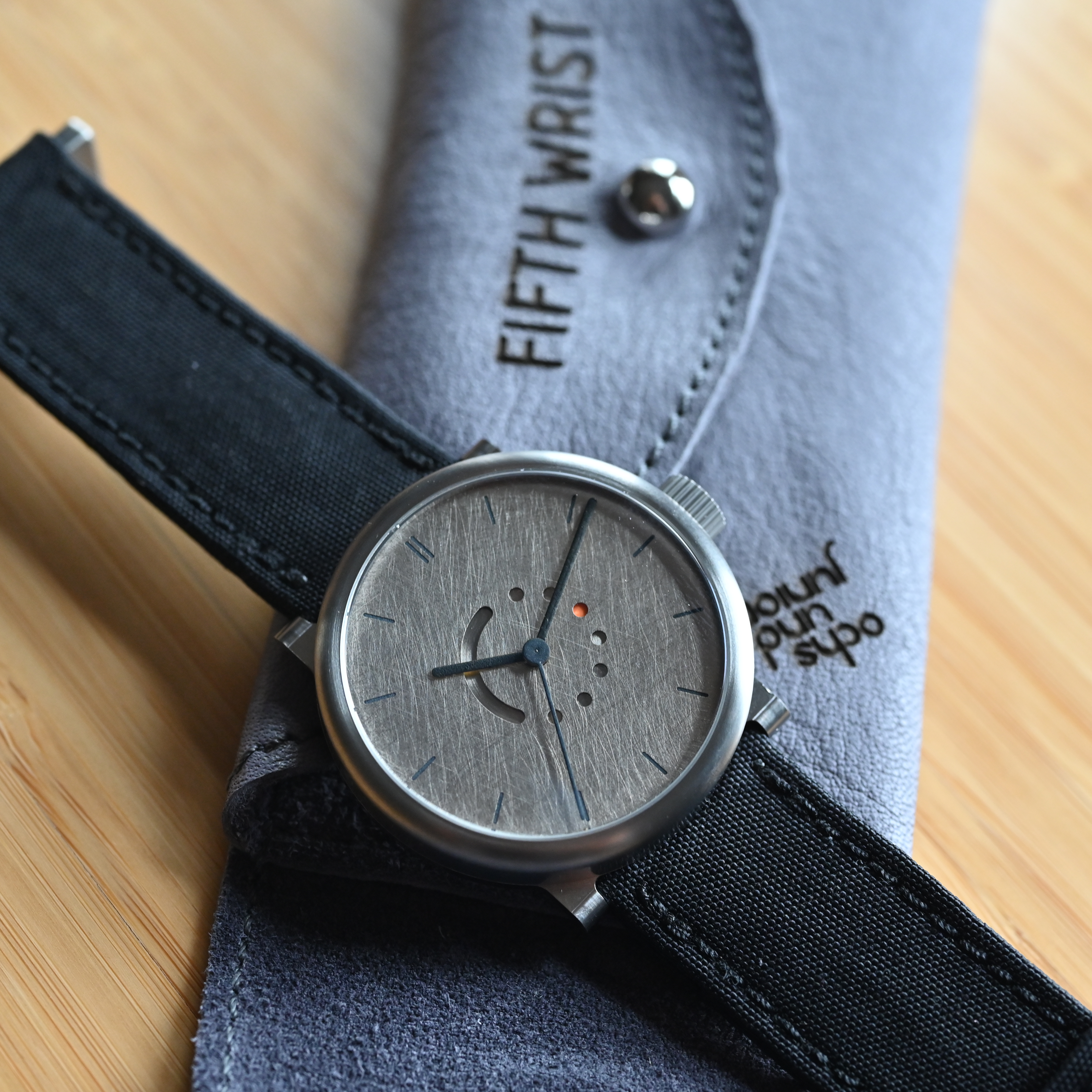 In celebration of the watch, Claus traveled to La Chaux-de-Fonds and delivered a series of matching hats that he had made so that they could be distributed with the watches.
Less than five months from the invitation from ochs und junior,
the watches were assembled and tested by Nicolas Miéville and Jeremy Römer in the studio of ochs und junior in
La Chaux-de-Fonds, and then shipped to our homes.

As none of us would have come together without the leadership and hard work of Alex (@thewatchregulator), founder of @fifthwrist, several of us chipped in to get him a settimana as a gift. As he unwrapped the watch at a brunch in Melbourne, Australia, his emotional reaction was livestreamed around the world.

True to the Fifth Wrist belief in not accepting discounts from brands, we all paid a market price consistent with other settimanas. As the watch is a special edition, not a limited edition, other current and future members of Fifth Wrist are welcome to order one from
ochs und junior. 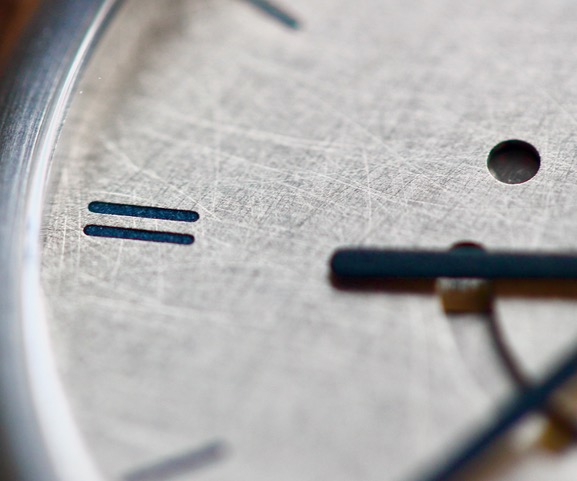 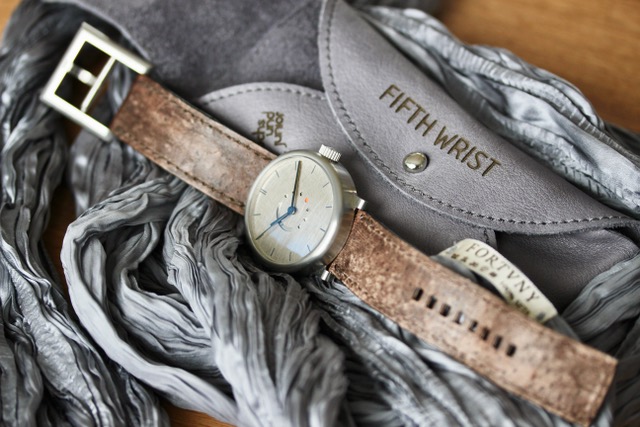